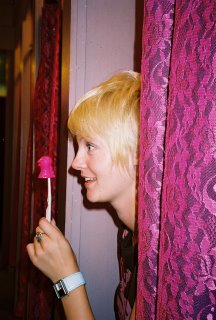 I had never really met anyone who looked like me. Other people said I looked like friends of theirs, but I never saw these friends and I was sceptical. Until I met birdiesaur. Birdiesaur is a dinosaur toothbrush cover that is kind of bird-like and who happens to look a whole lot like me. The photo says it all. I don't have a toothbrush for a body--it's more of a facial likeness.

Strangely enough, while we were in a bar in Boston one evening, a gentleman who worked in the bar came over to us and said, in a very thick Boston accent, that I looked exactly like his step daughter, gave me her e-mail address, and told me to get in contact with this person who he claimed had a striking resemblance to me. I never found her, but I did find birdiesaur.

Posted by Claire in Tuba-Town at 4:02 PM