Pretty much the most resilient grandma around

Today is Thursday. Today my grandma was up at 6am, she made herself breakfast, she helped my mom feed the dogs, she put away dishes - aside from not lifting anything over 15 pounds with her left arm, she's living her normal life. Why is this of any interest to me or anyone else? Because my grandma had a modified radical mastectomy* on Tuesday.

Yup, a surgery that I thought would have her down for at least a few days barely phased her. She of course spent the day of the surgery in the hospital bed, but that was the beginning, middle and end of bed rest for her.

Yesterday my mom came into town and I was to pick her up a the airport. Of course it wasn't in the books that grandma would come, but since she was feeling so good, she decided it would be great fun to surprise my mom at the airport. I was going to go into the airport and grandma was going to wait in the car and we were looking forward to the look of surprise on her face. Now, I say that my grandma was feeling good, but I didn't realize how good until we were at the airport. I go into the airport, wait for my mom and we walk out of the airport together. Then I decide to walk to the back of the car, since you wouldn't see grandma as well until you actually got to the car, thus keeping the surprise until the last moment. Well, we walk around the back of the row of cars, look down the row, and see my grandmother - my grandmother who had a breast removed the day before! - crouched over, sneaking behind the back of the car. To clarify the image, she looked a bit like Golum from Lord of the Rings. She had been peeking out in front of the car to see if we were coming and then ran to the back when she saw us. It was pretty much the funniest thing I've seen all week and definitely assured me that grandma is doing pretty damn well.

So I finally made it back from my 3.5 week journey to Jordan and the Mediteranean region. I'm still working on getting photos together from everyone -- I forgot my camera in the US and am just collecting photos from all my friends and hoping from the best. But, just to give you a taste of what's to come, here is a picture of me with some of my fellow students on board the Peace Boat. By the was, it's harder to breathe in a kimono than you might think. 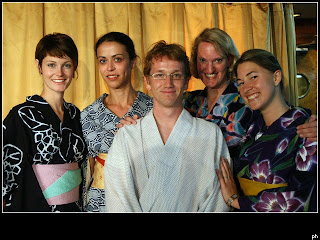 There will be more soon!
Posted by Claire in Tuba-Town at 2:08 PM 9 comments